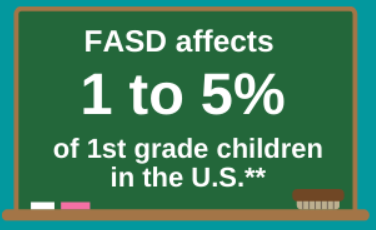 “The National Institute on Alcohol Abuse and Alcoholism is bringing attention to the range of cognitive and behavioral problems associated with fetal alcohol spectrum disorders (FASDs) that may appear at various times during childhood or early adolescence and that last a lifetime by recognizing September 9th as International FASD Awareness Day—part of FASD Awareness Month. This health observance also serves as a reminder that there is no known safe amount of alcohol consumption during pregnancy.

Prenatal alcohol exposure is a leading preventable cause of birth defects and developmental abnormalities in the United States. Prenatal alcohol exposure is associated with an increased risk of miscarriage, stillbirth, premature birth, sudden infant death syndrome (SIDS), and FASDs. FASDs are estimated to affect 1 to 5 percent of first graders in the United States.

FASDs are associated with physical effects such as facial abnormalities and growth impairments, but the most profound effects are on the brain and the resulting impairments in behavioral and cognitive functioning. These deficits can contribute to learning disabilities, speech and language delays, poor social skills, vision and hearing problems, and health problems requiring continued medical care, assistance, and social support throughout life.”